Possible reversal of labels on side menu

Current behaviour: Reverse of the above 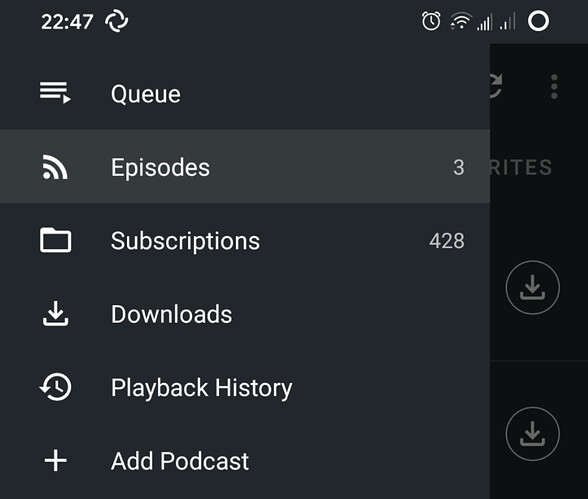 I think I’ve misunderstood what the numbers are supposed to mean. Perhaps they represent the number of new episodes and the number of episodes? If so, perhaps a fraction or boldface … or something else would make it clearer. If anyone thinks this is worth discussing, maybe we could throw some ideas around. It’s possible, of course, I’m the only confused one!

Hello I don’t remember what is the default but there is a setting to tell what you want the number to be. (In user interface → define subscription counter)

Mine is set to new episodes and unread.

Thank you, I took a look at that. Set it to “None” and now it shows the number of new episodes next to the Episodes/RSS icon and nothing next to the Subscriptions/folder icon.

But I can’t help thinking these options should apply to the Episodes/RSS icon, since they related to new episodes, not subscriptions. Have I misunderstood the paradigm?

To be honest, I have never reflected upon this. My understanding is that the numbers are always representing new episodes (for whatever is configured as the meaning of new). I can definitely see that it can be confusing if expectations are that the textual labels should be descriptions of what the numbers count.

How do you suggest the user interface could be made more intuitive? I saw you writing fractions or boldface, but seem to lack both understanding and imagination to envision it. What do you mean/suggest?