I’m a UX designer from Bristol, UK. I saw your post on Open Source Design requesting volunteers for user research for your app. If you are still searching, I would love to get involved.

Welcome to the AntennaPod community and thank you for offering your help! I had mentioned that we would welcome some help during FOSDEM, but didn’t realise that the great core team had already made a job post out of this!

As you will have read in the job post, the issue concerns how users interact (or rather: how they don’t) with the automatic downloads functionality and how we can best cater their needs. It’s a rather tough subject and we have multiple issues in GitHub, many things & settings to consider, and, as the great people from the OSD core team suggested, some assumptions to check. We’d want this to be an open & documented process, so everyone has a chance to follow and that we can point back to earlier steps later on in the process. But how best we can tackle this UX exercise, I think we’d like to determine together with you, drawing on your expertise (and discussing what would be feasible in our spare time).

Before we can do that, it’d probably be handy if I try and summarise the problem(s) at hand in a somewhat concise manner (I won’t ask you to read through 23 GH issues and hundreds of comments ^^ ). I’ll try and get back on this the coming days.

Hope that sounds good. Thanks again for offering your help!

Thanks for the reply!

First of all I’d like to say how cool the app is. I had a go with it last night - I think it’s one of the more polished open source apps I’ve seen recently, I can tell you’ve all put a lot of passion into it!

I have just been looking at the automatic download function you mentioned. I can see what you mean by how it’s hard to find but it seems really useful. I did also go through GitHub and some of the forums topics last night to get a sense of what you’ve been developing.

Regarding documentation; one possibility is that I create a Figma design where we can gather everything. Research such as user journeys can be made there but they can also be imported to be used if you wanted to present this somewhere, such as on the website. Long term we could put together a case study. But I’m open to any suggestions you and the rest of the team have

I was also wondering if it would be useful to put together a prototype of the app? It would at the very least help give me a better understanding of it. It wouldn’t take very long to do.

I’d be able to dedicate a couple of evenings/weekend each week.

First of all I’d like to say how cool the app is. I had a go with it last night - I think it’s one of the more polished open source apps I’ve seen recently, I can tell you’ve all put a lot of passion into it!

Nice! I’m sure it’ll be helpful to have some experience with the app

Have you used other podcast apps before?

I have just been looking at the automatic download function you mentioned. I can see what you mean by how it’s hard to find but it seems really useful. I did also go through GitHub and some of the forums topics last night to get a sense of what you’ve been developing.

The auto-download system works fine as it is, but our users have been requesting some new features both for auto download itself and which interact with the the process. The most-important one is the Option to auto download oldest episodes first. It has no less than 132 comments, indicating how much debated its implementation is

You can find these and all other relevant issues on GitHub, under the Rework automatic download/deletion milestone (except the last in the above bullet point list, which is already part of another milestone, even though it affects auto-download too).

Why I initially brought up AntennaPod with the Open Source Design team, is because the auto download process needs a rework which already integrates – or at least is ready – for all these requests. There’s so many new features and different ideas: it’s a complex thing to do right. And because it’s quite core to the app experience and a massive job code-wise also, I would like to do this right (that is: first discuss & agree on the UX).

Research such as user journeys can be made there but they can also be imported to be used if you wanted to present this somewhere, such as on the website. Long term we could put together a case study. But I’m open to any suggestions you and the rest of the team have

In terms of process, I have earlier proposed these steps the work on the auto-download rework that we could use as a basis. Would be happy to hear from you (in this thread) what you think of it (I’m totally happy to go about it differently).

one possibility is that I create a Figma design where we can gather everything. … I was also wondering if it would be useful to put together a prototype of the app? It would at the very least help give me a better understanding of it. It wouldn’t take very long to do.

I think having a full ‘replica’ of the app would be helpful indeed – also as a base for new interface designs. However, regarding the tool: I would really prefer it if we could use Penpot (https://penpot.app). It is a competitor of Figma (very similar in use), but then open source!

We prefer to use open source tools in our work for AntennaPod for ideological reasons. But going for an open source solution like Penpot also gives us the freedom to download, store (e.g. in our code repository) & use our work (designs) now as well as in the future (even if the hosted version or the company behind the product go down). As an added bonus Penpot has some useful features that require a paid subscription in Figma (e.g. shared libraries).

Would you be willing to give it a try? I already have a set of Components and screens I did for mock-ups, which we can build on: 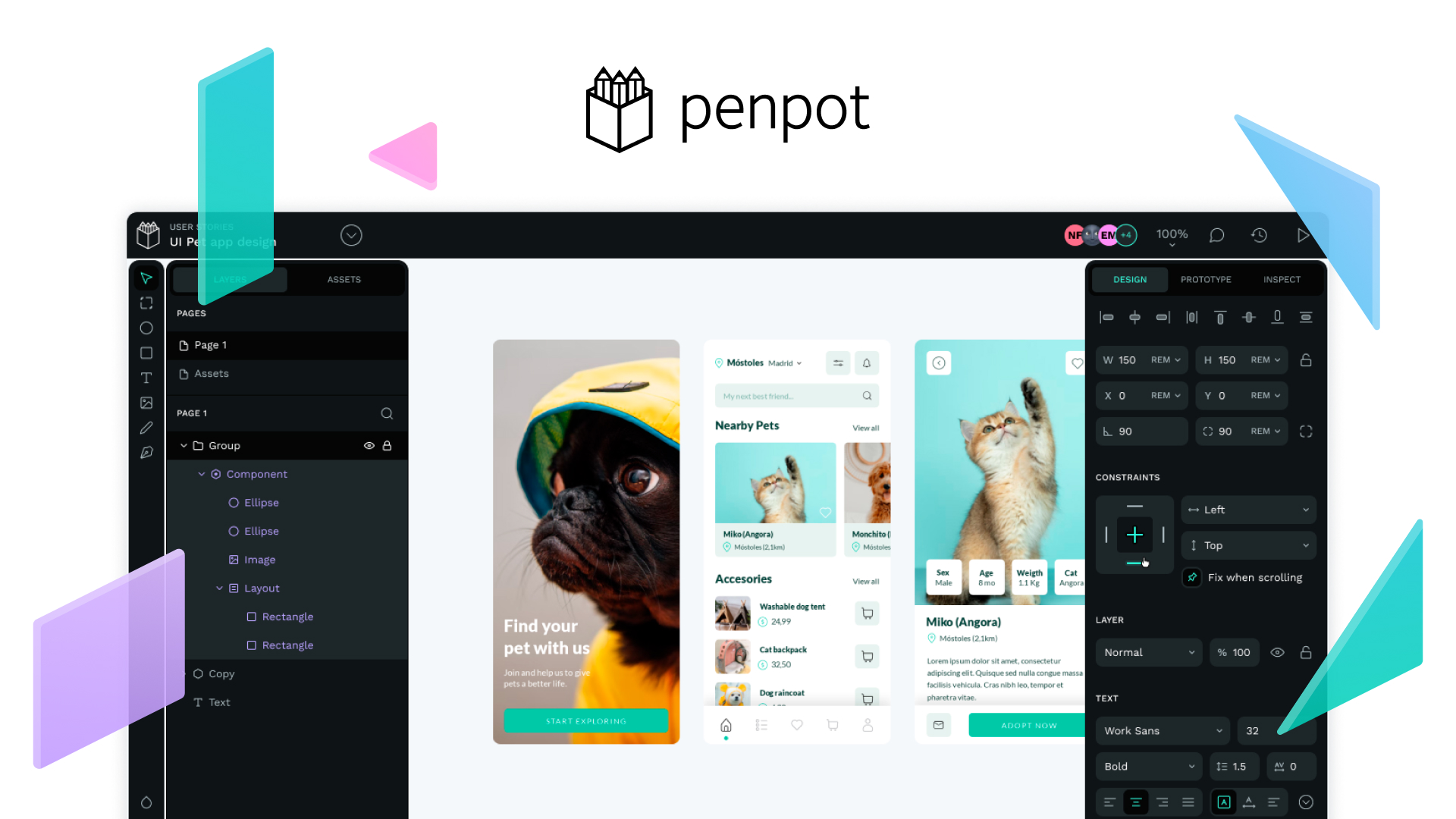 The open-source solution for design and prototyping

Looking forward to hearing back from you. And thanks again for offering your help!

Hey, thanks for the reply.

I was using Player FM, which is good but I was getting tired of it asking to me to upgrade to the premium. Before that I used to use Spotify. Currently I’m using AntennaPod to get more familiar with it but I’ve also been looking at several other ones for research. I started doing a competitor audit, and just putting it all together in a spreadsheet at the moment - it’s really useful for starting off. I will share it with you soon.

I will have a read through those links. Yes it would make sense to prototype these these things first

I haven’t used Penpot before but will have a play with it tomorrow. It sounds good though! Will be interested to see what you’ve done with it so far!

Would love to help as well if needed

You can send me the Figma file and we can plan some stuff. Wdyt?

@George_Rowland and I have spent some time going through the feedback that was related to auto-download (on both Github and this forum). It seems that this feature goes way back and has tons of feedback which makes it hard to follow. We decided not to continue working on this feature but we’d be glad to further contribute to the project for smaller tasks

hope that’s ok for you!

I must admit that I’m a bit disappointed, as I got excited that no less than two people might be interested in helping out with this difficult thing. I wish I had reached out to you for a chat so I could’ve given a short summary & soft landing and we had the opportunity brainstorm how it could be chopped into smaller pieces. Rather than anyone having to go through that huge pile of comments (which, as I mentioned, I wouldn’t expect anyone to do, so hats off to you for delving into that).

That said said, I understand of course - we’re all doing this in our spare time and for pleasure. So if you’re still up for contributing, all the better

We have the needs mock-up/user story label where your help would probably be welcome. E.g. the transcript tag or bottom navigation, and the making the podcast settings more prominent of course (I’ll try and reply to your proposal soon).

And thanks for letting me know outright.

thank you for your understanding! we wanted to tell you right away to sync your expectations as well

I understand that everyone has been trying to do a thorough analysis so that it can be done the ‘right’ way but at the same time, this has been an incredible long-standing issue. Many users, at this point, are just tired of talking about it. I really think it would be best if follow a more agile approach. That way we can get a prototype working and with some effort a releasable redesign.

I have already offered my proposal at a solution (Proposal for Auto Download Redesign - #49 by peakvalleytech). Nobody has shared their thoughts on it. I was hoping we could use this as a springboard to geting a prototype created.

Hi @keunes, apologies, I was supposed to message here sooner, it’s been a hectic week.

Yes @cristianson and I had a look at the forums and Penpot files last Saturday. We were pretty overwhelmed by it and the extent of the work that would be required (particularly the research). I think what stood out was how it seemed it would be difficult to implement what was being proposed due to the code, but also - as @cristianson said, it seemed only to be a feature that a small section of the userbase were requesting.

I’m not really sure if I currently have the research skills to do what you proposed well, and it would certainly take quite q long. I did start putting together a spreadsheet looking at the auto download functions of other podcast apps that I’m happy to share

Also I’m a little concerned about using Penpot. I think it’s really cool and I agree about keeping things open source but also it could slow down our work flow and possibly the quality of the work.

It was interesting looking at what’s currently there and I think there’s some good work. I do think it needs restructuring as a lot of the screens are on separate pages which makes it hard to navigate.

It’s difficult to build on what someone else has designed. I suppose the logical thing do would be to duplicate it in another project file so we don’t lose what’s currently there.

Like @cristianson also said, I’d still like to contribute to AntennaPod, however currently I’m very busy with work + own projects. But perhaps it would be good to get something small/quick done first to get the ball rolling?

Thanks for your understanding