Should gpodder.net be supported long term?

I am sorry if this offends folks, but I wanted to start a conversation about the long term support of gpodder.net inside of AntennaPod.

If we decide to support it the stability of the website
and service need to get better.

Very obvious bugs such as having duplicate feeds after a full sync need to be addressed on the gpodder side.

I wonder if @keunes and @ByteHamster can do a state of the integration, write down what is needed in investment weighted against the number of users using gpodder.net with AntennaPod, I assume there is a way to get that data.

I looked at the gpodder website and there are obvious issues with 500 errors, lack of podcast titles that make me not trust it. 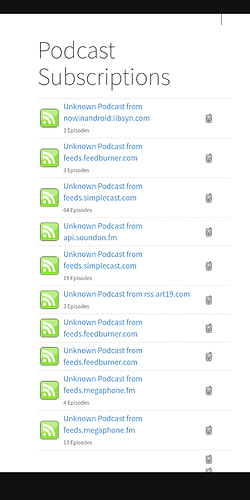 Hi @tonytamsf
Thanks for bringing this up. I agree things should improve - especially for those new users that don’t know what Open Source is and that gPodder most likely is underfunded. I can’t find it back, but I mentioned somewhere (on the forum or GitHub) that we could introduce a notification when users open the gPodder settings, that it is an open source project that could use some money. I think we can already do that now.

But having an integrated sync service I think is a very valuable thing to offer, one I wouldn’t easily rip out. It would be great if we (as a project) could get together with the new gPodder maintainer to see if we can tackle the main issues (unfortunately I don’t have time to map them). If our efforts don’t bear any fruit we maybe should move gPodder sync maybe to an ‘experimental’ section.

I think we should keep gpodder.net but, as @keunes suggested, a warning message could be a good idea. This would fit into my PR 4493. Because a specific gpodder bug is still not fixed, my PR needs to be updated, though. That makes my PR just a design tweak instead of simplifying the login process, though.

If there is another sync service with full podcast support (or someone is willing to develop our own sync service), we can make that one a bit more prominent in the app.

A “simple” Sync over Nextcloud/Dropbox or Google Drive in Antennapod would be a good solution.
Funding and reliability issues would be more or less gone.

A “simple” Sync over Nextcloud/Dropbox or Google Drive in Antennapod would be a good solution.

What would you sync it with? Another phone? A desktop app? Whatever we want to sync wirh, there’s going to be a challenge of interoperability (what data fo we move between A and B and how).
And welcome to the AntennaPod forum @Mattin

Is there any insight into what is broken on the gpodder side? ie: what do they need to move towards a fix? Is Antenna Pod the only 3rd party having issues with their service?

I have 2 tablets and one phone and I would like to sync my subscriptions and episode play state.
Most Android users have a google drive account that can be used it for sync but for supporting a support for nextcloud would be even nicer.

I have found the gpodder site all but unusable in recent times. I think it is overloaded. I think they provide a good service, when it’s available, but I’m unsure of their long term viability.

Backing up your feeds and listens should be able to go somewhere where else. In the ebook library tool, calibre, it is easy to place your library on Dropbox, and then you can pick it up on multiple computers, for example.

I think there are not many big apps out there that support gpodder.
I have a small desktop app that I want to integrate with it (main motivation is that I recently discovered AntennaPod also integrated with it), but the recent stability issues are a deal breaker for me to implement something and test it.
I am trying to contact the maintainers in their slack chat, but so far I did not get any response there.

Unfortunately there is no other sync service like that that I know of, and building one is not a very easy task, running a service has costs…

I am trying to contact the maintainers in their slack chat, but so far I did not get any response there

I had no luck either, unfortunately.

Is there any insight into what is broken on the gpodder side? ie: what do they need to move towards a fix? Is Antenna Pod the only 3rd party having issues with their service?

@Matt_Wilkie Since the whole site is down, it’s probably not only AntennaPod that’s affected. But as @dellagustin said: AntennaPod is probably one of the fewer apps to integrate with the service anyway.

Most Android users have a google drive account that can be used it for sync but for supporting a support for nextcloud would be even nicer.

Backing up your feeds and listens should be able to go somewhere where else. In the ebook library tool, calibre, it is easy to place your library on Dropbox, and then you can pick it up on multiple computers, for example.

Back-up
You can already export a back-up your AntennaPod database to wherever you want (see menu > Storage > Import/Export > Database export): Dropbox, Nextcloud, OneDrive…
At the moment this is a manual action, but it could be automated (e.g. make a back-up each day, like WhatsApp does).
You can import your back-up to any other AntennaPod installation.

I’m not a developer, but I think it requires a central service with an API (like gpodder.net). I don’t think such synchronisation would be technically possible via a filesharing service (especially with how AntennaPod works).

Think of like this: It is possible to share photo’s as individual files - if you take a new one on your phone it gets sent over to Nextcloud and picked up on your computer. But all of the individual episodes (in AntennaPod) are listed in one single big database. We can’t send just one single row (episode), column (favourited status) or cell (favourite status of a particular episode) of the database to a filesharing service.

So
As noted before, sync relies on interoperability. AntennaPod’s database cannot be used by any other programme than AntennaPod. So it could work if you have multiple Android devices all with the same AntennaPod version installed. But even then it’s annoying, because you manually need to import every time. And if you listened to an episode, refreshed your feeds or did anything else on two or more devices, there is no way to ‘merge’ those changes. For a one-time copy, however (e.g. if you have a new phone; if your phone crashed and had to wipe the data) this is a perfect solution.

Side-note: I just tried to open gpodder.net. It took (relative) ages, but it loaded.

https://gpoddernet.readthedocs.io/en/latest/user/clients.html lists over a dozen active clients, depending on how one counts; not sure how current the “active” flags are tho’.

Looking over the issues and pull requests for the gpodder web service I see an overwhelmed volunteer project. I’d hate to see it go down due to catastrophic success. I’m scanning for ways I might be able to help alleviate pressure, both there and here.

I’m stating the obvious here. Syncing the podcasts has been helpful when upgrading/changing to a new device and when the device need a factory reset to recover. I’ve used the sync probably a dozen times and hope that it returns before the next time that I need it.

@sgelfond for those use-cases you can try the database import/export feature. It contains AntennaPod’s complete database, not just the things that gpodder supports.

Whould it be possible to implement syncing AntennaPod with Nextcloud News? It has basic Podcast-Support (I used the corresponding Android App for listening before I discovered AntennaPod), can import/export to OPLM, is well maintained and widely adopted.

I would be super happy, if a sync with AntennaPod would be available!

That would be interesting, but I don’t think Nextcloud News offers or can offer all necessary features. In News the read/unread status could replace the new/not new label in AntennaPod, and I think we could sync favourites. But features like queue, playback position and played status could not be synced. Especially the latter is problematic.

But you might create an issue in the Nextcloud News repository/forum to see if they’re open to expand their scope. If they are, and it gets implemented on their side, I don’t see why not (implement support on AntennaPod’s side). But I’m sceptical they’ll be open to do so, as providing a solid RSS news server & reader is a good project of and in itself already

From my point of view, an automated backup to local storage is all I need, then my Syncthing configuration does the synchronisation with my other devices

I just want something to let me sync the podcasts I subscribe to between devices, and something I can add/delete/manage subscriptions on a desktop. Trying to do it on a mobile device isn’t easy for me, since my hands shake a bit too much these days.

A factory reset wipes that out, doesn’t it?